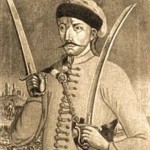 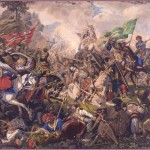 Câmpul Pâinii (the Bread’s Field) and Pavel Chinezul’s memorial: the place of one of the most famous battles between Christian and Ottoman armies. The Romanians victory on the Bread’s Field, a ground plan that extends from Șibot to Romos, in the battle of October 13, 1479, delayed for nearly half a century the Ottoman invasion of Western Europe. Plus: afterwards, Transylvania was bypassed by the Turks even when, after the Mohacs battle in 1526, Hungary became, for a century and a half, a Turkish pashalic. The historian Cristian Ioan Popa very plastically named the Bread’s Field: „This Transylvanians’ Marathon „.
According to the chronicles, the battle’s decisive contribution was the one of the soldiers that, led by Pavel Chinezul himself, were fighting in the front lines. Pavel Chinezul, or Knizsi Pal in the Hungarian historiography, became a legend’s hero, equally claimed by Romanians and Hungarians. Officer in King Matthias’s army, as it is represented in the statuary ensemble ” King Matthias ” in Cluj-Napoca, was rewarded for deeds of arms in 1478, with the title of “Comite” (cneaz in Romanian – the equivalent of a Prince) of Timisoara. He crossed, therefore, with his army, Banat and part of Ardeal to join the armies led by Istvan Bathory, the voivode.
In his victory’s honor, King Matthias erected a chapel on the Bread’s Field. Destroyed in time, it was replaced by a monument that, as well, disappeared. Today, Paul Chinezu’s memory is still being honored by the memorials erected in 1929 by Nicolae Iorga, located inside the Șibot railway station – an important railway junction. 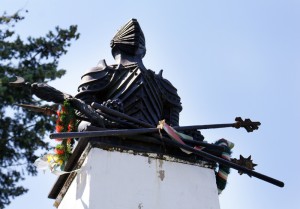 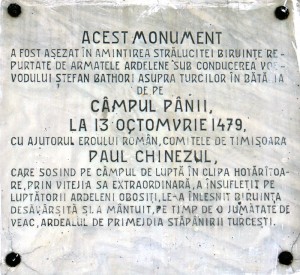