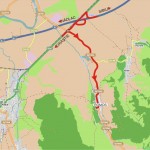 If you come from the west, through Deva – Orăștie on the E68 European Road (possible access by the Arad – Sibiu highway as well, with a descent towards Geoagiu – Orăștie), at the roundabout next to the Geoagiu railway halt, turn right and, after 5 km of paved road, you will reach the center of the Romos commune. You will be amazed to encounter a domain that, in 2002, was declared a historical monument in its entirety, especially due to its specific Saxon constructions (in 2014, because of objective reasons imposed by the joint development of the commune, its declassification was obtained and in the entire locality dozens of constructions were punctually identified and declared, on their own, historical monuments). 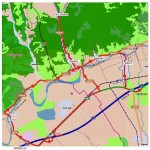 For those enjoying traveling by car: just after the bridge over the Mureș river and before entering Geaogiu, the Hunedoara – Alba inter-county road emerges, a road going upstream on the right side of the river. A few kilometers ahead you will reach Băcăinți and, afterwards, Sărăcsău, both villages belonging to the Șibot commune. The commune’s downtown is located on the opposite shore.

From Băcăinți you can easily reach (paved county road) Ceru – Băcăinți, the commune with the lowest number of inhabitants in Romania (269, at the 2011 census). It is situated on the southern slopes of Munceilor Vințului, south-east of the Ore Mountains, and it has a hilly-mountain terrain with an altitude that varies between 300 and 1000 m. You will encounter a mountain villages’ specific habitat, but also some unique features that you will not be able to find anywhere else: homes built exclusively of river stone, from foundation to the roof – a skill handed down for centuries from generation to generation, and a craftsman who creates wood objects hewn from a single piece of wood. 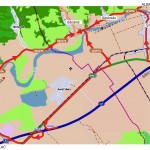 In order to return to „civilization” – to be read: DE 68 and highway – you will have to cross the river Mureș back. You can take the opportunity and cross it by brodina: a floating bridge moved, thanks to an ingenious mechanism, by the water’s current – or, in other words, by a kind of ferry, at a much smaller scale and without an engine. There is one such passing for each of the Șibot commune’s villages: at Băcăinți, at Șibot and at Balomiru de Câmp .
Those who wouldn’t want such an adventure though, can choose to follow ahead, upstream, the inter-county road, up to Vurpăr, where the concrete bridge over the Mureș River will take them to the European Road in Vințu de Jos.
If, instead, you are coming from the west, by Sibiu – Sebeș, or through Alba Iulia, by the same DE 68 road, at 7 ​​km from the Lutsch Inn (Vințul de Jos), immediately after the road crosses, for the first time, by a viaduct, the highway, you will meet the Șibot commune’s entrance. The tired or hungry traveler can pant for a while, right before the viaduct at the Șurianu Inn or at the Florence Bed-and-Breakfast. Or, even a few miles sooner, at the „Gura de rai” (Slice of Heaven) pension.
To enter Șibot, turn right, from the European road. The village is structured around a main lane with an S-N direction, which crosses it in a straight line from the National Road, crossing the railway line up to the Mureș River. But if you continue on, after about 15 km you’ll encounter the roundabout of the CFR Geoagiu railway halt. Where, this time to the left, after 5 km, you’ll arrive to the city-center of Romos.

Open Maps Widget for Google Maps settings to configure the Google Maps API key. The map can't work without it. This is a Google's rule that all sites must follow.